Come to work every day as if it’s your first day on the job, with Linda McMahon. 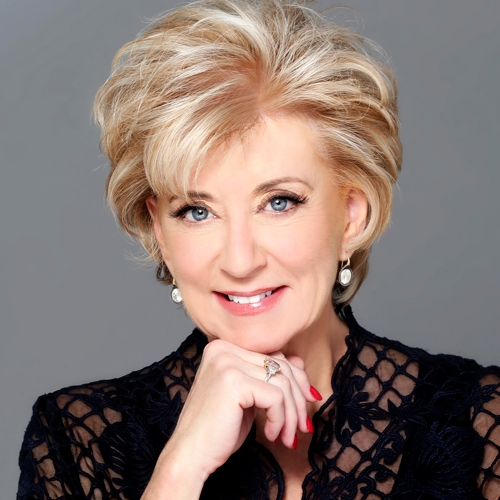 Linda McMahon is the co-founder and chief executive officer of Women’s Leadership LIVE. Her company uses live events and ongoing mentorships to educate and inspire women to launch and expand their own businesses, advance their careers toward executive roles, and pursue opportunities for leadership in public service. Linda is also a co-founder and former chief executive officer of WWE — on the New York Stock Exchange as WWE. She stepped down as CEO in 2009 to run for the U.S. Senate and was the Republican nominee to represent the people of Connecticut in 2010 and 2012. As CEO, Linda helped grow WWE from a modest, 13-person operation to a publicly traded global enterprise with more than 800 employees in offices worldwide. Linda has been widely recognized as one of the country’s top female executives and for her numerous philanthropic contributions including the company’s “Get R.E.A.L.” educational and literacy programs and The Make-A-Wish Foundation recognized WWE as a top wish granter.

Linda keeps track of what she needs to get done with lists — but you have to be nimble enough to react when an opportunity knocks on your door. ONWARD!

Start your day in a way that gets you going — Linda works in the morning with a personal trainer 4-5 times a week.

Linda had to declare bankruptcy — and Linda tells the whole story here.

“You must not be arrogant and not be willing to shore up your weaknesses.”

“Come to work every day as if it’s your first day on the job.”

I would retarget marketing when the marketplace is shifting.

How best to connect with Linda: